Cashman Should Leave Next Season

Share All sharing options for: Cashman Should Leave Next Season 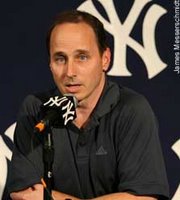 Brian Cashman has been one of the most active GM's in baseball since 2000. He is credited with rebuilding the Yankees with the acquisition of Roger Clemens, and trading Alfonso Soriano for Alex Rodriguez. He is also known for signing big name players such as Hideki Matsui and Jason Giambi, and locking up Derek Jeter and Bernie Williams long term. However, he has had a rocky relationship with ownership that has lead to many problems and almost lead to him leaving the organization in 2005. After signing an extension however, he rebuilt the Yankees organization with young talent like Joba Chamberlain, Ian Kennedy, Phil Hughes, Dellin Betances, Juan Miranda, and others that have put them in a place to be at the top of league for the next several years.

Since Steinbrenner passed the reigns over to his sons, Hank and Hal, they have become much more involved in the decision making which basically pushed Cashman off to the side. Cashman's track record with the Yankees has given them three World Series victories, and five pennants. The Yankees did not have much to do this off season, but Cashman and the Yankees were able to bring Rodriguez back, along with veterans Jorge Posada and Mariano Rivera. They added a couple arms to the bullpen in LaTroy Hawkins and Jonathan Albaladejo, which will take some stress off other arms in the 'pen. They are still involved in Johan Santana talks, but I do not think Santana will be moved. They are also banking on several of their young pitchers in the rotation, while relying on a successful platoon in center and first base.

So what is next for the Yankees? I expect another second place finish, competing with the Indians and maybe the Mariners for the Wild Card. Either way, if they don't make the playoffs, or make it to win the World Series, Cashman should walk. There are possible openings in Queens with the Mets, Chicago for both teams, Baltimore, Philadelphia, and Cincinnati. Cashman could build another team to greatness without the stress of powerful ownership. Several teams that have openings are in contention, and would benefit from Cashman's experience. I know the Nationals were interested back in 2005, and it seems likely that when the Cubs are sold, Jim Hendry will either be let go, or move to a higher position within the Cubs. Cashman's departure is long overdue, and it will send the Yankees scrambling for another GM with as much experience as him.