Clearing Some Smoke In Chicago

Share All sharing options for: Clearing Some Smoke In Chicago 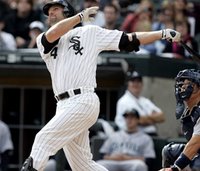 It has been reported over the past forty-eight hours that the White Sox and Angels were closing in on a deal. However, Kenny Williams denies the claim and said he has not spoken to Angels GM Tony Reagins since the Winter Meetings. The rumor spread very quickly and was fueled by Reagins when he would not confirm or deny the report. However, Williams put the rumor to rest and refuted the report. That does not mean a deal will still not happen, but I think the WhiteSox would like to re-access their situation after giving up three top prospects to acquire Nick Swisher before they move forward. A report out of a Chicago radio station says the Cubs have some interest in Jon Lieber. However, I spoke with a Cubs official late last night who said they do not have interest in Lieber, but they do have some interest in adding another pitcher. I don't know why they would go after Lieber to begin with. The back end of the rotation is something they are trying to improve and Lieber, who is well passed his prime, is not a good fit.