Share All sharing options for: Dodgers Struggle To Close Deals 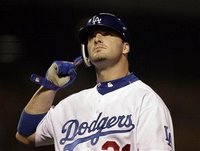 The Dodgers have had discussions about re-signing free agents Rudy Seanez and Mark Sweeney, but talks have stalled recently. They can't seem to come to terms on money, and it is possible that they are not willing to give them major league deals because they have several young players who could break the roster next season. Sweeney hit .260 with 2 HR and 13 RBI in 106 games last year, numbers that certainly do not warrant a major league deal. Yet, Sweeney is a above average bench player who the Dodgers might benefit from. If Sweeney wants to be back with the Dodgers, he might need to prove it during Spring Training. As for Seanez, he put up pretty good numbers from the 'pen and probably could do it again, but he might be asking for a lot of money. He went 6-3 with a 3.79 ERA in 73 games last season, and has showed no signs of slowing down. I think the Dodgers will be contenders for the division or wild card next season, whether it is with these guys or not.