Share All sharing options for: Dombrowski: Inge Should Catch 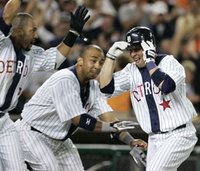 Tigers GM Dave Dombrowski thinks Brandon Inge should take up catching again. After exploring trades for over a month, it appears that Inge will be with the Tigers in 2008 in a super-utility role, playing catcher, third base, and outfield. Although he wants to start, he will still see plenty of at-bats. Rodriguez only played in 129 games at catcher while Jacque Jones is no guarantee in left field, so he could play a lot more than he thinks. "If I were Brandon Inge's best friend, I'd tell him, 'You should catch,' " Dombrowski said. "This guy could be an All-Star catcher. He's not only good defensively, but his offense takes on a different meaning. ... If he puts (last year's) numbers up catching, he might be an All-Star. But you also realize that guys have to do what they want to do." Obviously, Inge wants to win as a starter but if he can play in over 120 games, I think he would reconsider. But, the Tigers continue to explore trades hoping teams will take a defensive minded third baseman, but have not found any takers as of yet. As for teams that could be interested, I suspect the Giants, Marlins, and Orioles, among others.

FANTASY RECOMMENDATION: As you prepare your fantasy rosters, I don't think Inge is someone to invest in. If he gets traded and becomes an everyday starter, he might be solid pick up if your starter goes down, but only temporarily.