Indians Hope To Lock Up Sabathia

Share All sharing options for: Indians Hope To Lock Up Sabathia 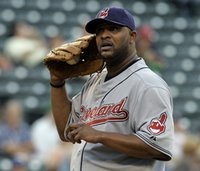 Indians GM Mark Shapiro confirmed to the Plain Dealer that an offer had been made to CC Sabathia, but would say nothing else. I am sure the sides will exchange figures all the way up to Spring Training, if not further down the road. Sabathia is just 27, entering his prime, and could probably net a seven year deal worth 130-140 million dollars. He has never had a losing season, and has always been in double digits in wins, so that alone is worthy of a big contract. I think the Indians are willing to fork over the cash, but are not comfortable going beyond four or five years. The prime years are 28-32, so I expect to see a lot more from Sabathia and if I was an Indians fan, I would be very excited about his potential. However, if Sabathia's agents and the Indians cannot work out a deal, it is possible we could see a big trade, perhaps to the Yankees, to acquire some young prospects at the trade deadline to potentially compete with down the road.

Pirates in talks with closer Capps: The Pirates and the agents of Matt Capps are in talks over a four year contract that would keep the closer at a set price instead of going to arbitration. I think it is a good deal to keep their closer in tab, but it will be swing or miss on the contract depending on how he does over the next four seasons.