Share All sharing options for: Interview with Jack Egbert 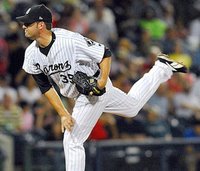 This afternoon, I placed a call to Jack Egbert's former agent and not two hours later did I get a call back from Egbert himself. He was rather quiet, but I could tell from all his answers how confident he was with his game. Egbert is currently on the White Sox 40-man roster, and is number six on the depth chart for the starting rotation. Egbert has been very impressive over the past five seasons in the minors, and if he continues to play well, there is no doubt in my mind that he will be in the rotation for the White Sox. I want to thank him again for doing this for me, I really appreciate it.

ELI: What part of your game would you say was most improved while at Rutgers?

JACK: I think I grew as a whole. I learned the little things that you do not picked up at the lower levels and learned things in each game I pitched in. But, I really think I grew in just about every aspect of the game while at Rutgers.

ELI: What did it do for your confidence after doing so well in your first year after being drafted?

JACK: Oh it was great. I felt like I belonged. Going in as a low draft pick, I was not sure what to expect. It is easy to get caught up in that too, but I had a good approach. I wasn't cocky, I just went in and got the job done.

ELI: In 2006 you played in Single-A and Double-A. What sort of adjustments did you have to make to do well?

JACK: At the time, I was throwing well so I didn't have to do too much. I was on a roll. I was feeling good, so I kept doing what I was doing.

ELI: What are the biggest differences in Single-A and Double-A?

JACK: In Double-A, the hitters are much more patient. They have no problem sitting on a pitch. They wait for you to make a mistake while in Single-A, they are much more free swinging.

ELI: What did it mean to you to get put on the 40-man roster this off season?

JACK: It was great when I heard. You know, it is my fifth year in the minors. I have been working hard, taking it level by level. I am just excited that I get to go to big league camp and show them what I can do.

JACK: No, at least not for the White Sox. For the Sox, everyone not invited to the big league camp reports to this big complex down in Arizona.

ELI: What have you been doing this off season to prepare for 2008?

JACK: I have been working out, throwing. Trying to build up my innings, it's been good.

JACK: Whatever they'll give me. I'll take any number to be on the White Sox. [Laughs]

ELI: How was the AFL this year?

JACK: It was cool. It was a great experience for my team because we won. But I was able to get some more innings in-

ELI: What would you say is the biggest thing a pitcher needs to get to level you are at now?

JACK: They need to be consistent, be able to throw strikes. You don't want to hurt yourself with mistakes. Or make it easy for the hitter.

ELI: Some say that players get worn down adding an extra month to their schedule. Did you feel that way in the AFL?

JACK: Actually no. We ended in early September and had the whole month off before the AFL starter. So to go from nearly shutting down to back in full swing was hard. It took some time to get back in the mode.

ELI: What stat are you most proud of looking back on your 2007 stats?

JACK: It is always good to keep your ERA down, and I was happy about that. But I don't like to walk anyone so to have low walks was nice.

ELI: Do you follow baseball during the offseason? What do you think of some of the moves the White Sox have made?

JACK: I follow it, but not as crazy as some. They seem like strong moves though. I don't really know much about them, but they look good on paper.

ELI: If you had one chance to strikeout one hitter, from the past or present, who would it be?

JACK: I am going to have to go old school on this one and go with Mickey Mantle.