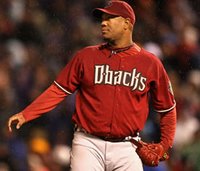 According to MLB.com, the Mets and Livan Hernandez are closing in on a believed three year deal. Well, I can't say I haven't called this. I have been saying this since the very beginning of the offseason. This is a good move for the Mets, who have not done anything to improve their squad since September. Hernandez should look pretty good with the Mets considering his brother is also there. Also, it should push Mike Pelfrey from the rotation for the time being, which should allow him to ease in to the MLB in a less stressful role.

With this signing though, does it mean that they are out of the Santana race? No, I don't think so. The Mets rotation has a lot of question marks in it. El Duque has some health problems, Martinez might have some health problems. By acquiring Johan Santana, it would give them a number one starter for the next several seasons. Personally, I think they should go through with the trade, but the Mets just are not ready to give up on Fernando Martinez.