Share All sharing options for: News and Notes: Braves Talking With Teixeira 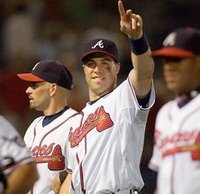 The Braves and Mark Teixeira agreed to a one year deal today worth 12.5 million dollars, but talks of a long-term deal continue. Both sides confirm that they are moving towards a deal, but no deal appears imminent just yet. I think Teixeira could earn 20 million on the open market if he puts up similar numbers to last year and I think the Braves are hoping he will take a discount. In 132 games last season, Teixeira batted .306 with 30 HR and 105 RBI. Personally, I think Teixeira will stay in Atlanta. Interest will definitely be high for Teixeira, especially from teams like the Mets, Giants, and Orioles, all of whom are looking for first baseman.

Dodgers May Trade Pierre: The Dodgers have four outfielders capable of starting and may look to trade Juan Pierre. Pierre signed a huge deal in 2006 but with the acquisition of Andruw Jones, he is the odd man out. I think the Dodgers will have trouble trading him, mostly because of his high salary.

Cubs Eying Marlon Byrd: The Cubs Convention started this weekend with the big suprise being the signing of former White Sox closer Shingo Takatsu. However, rumors are flying that they are looking to bring in a right handed outfielder to platoon with Felix Pie. A trade for Marlon Byrd might cost them something like Kevin Hart, but that at the most.

Phillies Begin Talks with Howard: The Phillies have begun preliminary talks with Ryan Howard about a long term deal. However, they are expected to table discussions before Spring Training and wait till next offseason.

Rockies Talking with Tulowitski: The Rockies and Troy Tulowitski are working to complete a long term deal that could lock him up through 2013.

Coco Crisp Still On Block: The Red Sox have yet to trade outfielder Coco Crisp but plan to do so before Spring Training. A lot have teams have already filled the void in center so it might be hard to trade him, but I think it will get done. If the Rangers trade Marlon Byrd to the Cubs, there will be an opening for Coco Crisp. Also, the Padres are a possibility if they can get a good deal.

Orioles trades dead?: Despite reports from ESPN 1000 that said a Brian Roberts trade would be done this weekend, it appears that talks have stopped. Once source said both trades are slowing down because of the Orioles 'unwillingness' to make these deals happen. However, Roch from the Baltimore Sun believes there is still a 50-50 chance a deal gets done.

Nationals Remain Interested In Benson: A source close to Kris Benson confirmed that the Nationals have remained interested in Kris Benson since his workout down in Arizona.