Share All sharing options for: News and Notes: Mariners Call Back Jones? 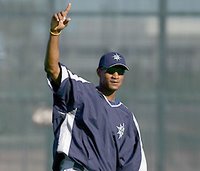 Today, the Mariners called back prospect Adam Jones from the Winter League in Venezuela. Could this mean an Erik Bedard trade is in place and they need to take physicals? I don't know, but it is definitely something to follow. I don't think this means a trade is done. Teams pull back players all the time because they want them to rest before Spring Training. I think the Orioles would be foolish not to trade for this guy. Bedard could net a boatload of prospects along with Jones, and he really isn't making enough difference for the Orioles to justify keeping him. And Jones, 21, has the potential to hit for a high average, and put up good power numbers in his career. What more can I say about the Orioles, if they can land four players from the Mariners and four from the Cubs, they should do the trade. They are going no where with the team they have now and can only hope that the prospects they acquire can put them back in contention for the future.

Reds like Lieber: The Reds have had their eye on Jon Lieber for over a month now, and it appears he will probably be heading there. The Reds prefer Lieber over a more expensive player like Lohse or Hernandez.

Piazza to Marlins? Marlins Say 'No Thanks.': Catcher Mike Piazza said he would like to finish his career with the Marlins, but the Marlins politely declined. That is understandable, considering what Piazza is probably looking for. His best bet now seems Japan.

Shea Hello Sammy?: One agent who asked to remain anonymous believes that Sammy Sosa would take a minor league deal from the Mets if it was offered. I haven't heard if the Mets were interested, but I am sure they would dish out a contract to Sosa if he was willing to take a pay cut.

Athletics plan to keep Blanton, for now?: The Athletics appear content with holding onto Joe Blanton for the 2008 season. He should be a good guy at the top of the rotation leading some of the younger ones.

Dodger Great Podres passes away: Brooklyn Dodger hero Johnny Podres passed away today. He is most remembered for his game seven victory in 1955.