Share All sharing options for: News and Notes: Mets Desperate For Pitching? 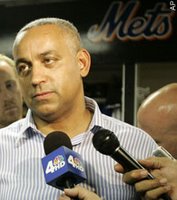 The Mets have exhausted every pitching option over the past month or so, and are now turning back to the A's to try and work out some final trade. And with the A's going all out in rebuilding, it would make sense they would go to the desperate Mets. They A's picked the perfect time to start dealing. Now that the top free agents are off the market, and teams have tried to make trades to fill spots, the A's come in offering the best players available. I am sure after Blanton, who I fully expect to go to the Mets, they will offer Mark Ellis, who is a year from free agency, along with Eric Chavez, although he might be harder to trade. In a trade with the Mets, I think they will focus on landing a top pitcher, perhaps Kevin Mulvey, along with two other prospects. As for Mark Ellis, the Rockies seem like a good fit with Ian Stewart just a year away, and could package a deal involving Brandon Hynick, and another low-level prospect. I think the A's will continue dealing, at least until Spring Training. The free agent market was so poor this year that teams might be more willing to part with prospects. Here is what else is making news:

The Reds are still looking for pitching: Even though they are still in trade talks with the Orioles, the Reds have started looking into free agents Livan Hernandez and Jon Lieber. Hernandez would be a great pick up, I think Lieber is a little past his prime.

Angels looking to acquire Konerko?: The Angels have reopened talks for first baseman Paul Konerko. A deal seems to be moving rather quickly, and involves Howie Kendrick and Ervin Santana. It is possible Casey Kotchman is involved because it leaves no room for him if Konerko is acquired.

Mets bring back Pagan: The Mets re-acquired OF Angel Pagan from the Cubs for minor league pitchers Corey Coles and and Ryan Meyers. It seems like a dump move on the Cubs part. They gave away a speedy outfielder for next to nothing. Still, it gives the Mets some options in the outfield and it gives the Cubs room on their 40-man roster.

Luis Ayala Expected To Return: Nationals pitcher Luis Ayala was injured in a hunting accident but should be ready to go for Spring Training. Ayala was pretty good for the Nationals last season going 2-2 with a 3.19 ERA and 28 K in 44 games.

The Phillies still interested in Otsuka: A source at the Wilmington News Journal indicated to me that numbers have not been swapped, but talks have re-opened.

Brewers Considering Gonzalez, Lofton: The Brewers plan to meet next week about bringing in another outfielder, perhaps Luis Gonzalez. Gonzalez has expressed his desire to play with the Brewers and he might be willing to accept and incentive-laden contract. Lofton has been as consistent as ever over the past five years, despite aging. He might be a better pick up than Gonzalez because he has more speed, and draws more interest at the trade deadline than Gonzalez because of his success in the second half of the season and in the playoffs.

Rangers Interested in Trio of Pitchers: The Rangers are interested in pitchers Jason Jennings, Mark Hendrickson, and Mike Maroth, but figures have not been exchanged.

White Sox Looking For Relief: The White Sox might use an acquisition in the Angels trade to acquire some relief pitching, assuming a trade happens. Toronto seems like a good place to start.

Rockies Close In On Towers: The Rockies are closing in on a one year deal with pitcher Josh Towers.