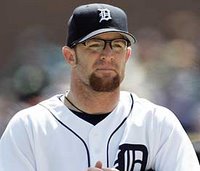 The Tigers locked up Nate Robertson to a three year extension worth 21 million dollars. Robertson has always been able to rack up innings, and is the perfect back end of the rotation guy. You cannot expect all of your pitchers to win 15 and lose 5, but to have someone who can win 10 consistently, and save your pitching by pitching late into games, is always good. "Nate has been a quality starter during his time with the Tigers," Tigers president Dave Dombrowski said, according to The Associated Press. "We are excited to sign Nate to a long-term contract, and we look forward to him being part of our rotation for years to come.". He is 42-55 lifetime with a 4.60 ERA.

Rockies, Blue Jays talking long-term deals: The Rockies are talking with Matt Holliday about a long-term deal, but so far, have not gotten far. The Blue Jays are also talking with Alex Rios but those talks are believed to be preliminary, and are expected to get more serious after the season.

Angels Santana hopes to bounce back: Any team looking for a starter should be looking to acquire Ervin Santana. He has made adjustments that were not made last season against hitters and will be ready to put up good numbers again. I think he will be a key piece in the Angels run to the playoffs.

Six-man rotation in Boston?: Assuming a trade with the Twins does not happen, they Red Sox will open the season with six potential starters. It is possible we could see Clay Buchholz as a long reliever to ease him into the rotation, but it doesn't make sense. I do not think they want to take starts away from anyone, so we'll have to wait and see. It is possible that if Wakefield struggles, he will replace Buchholz in the pen.

Jose Valentin back with Mets: He signed a minor league deal and was invited to Spring Training.

Cubs fans don't like steroid user?: Although Cubs fans would love an All-Star, they do not want a steroid user. I think steroids are bad in baseball, but I would not be against acquiring one. I think there should be punishments, but if I were Cubs fans, I would love to have Brian Roberts.