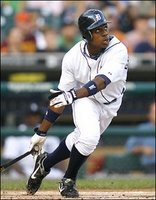 The Tigers are still in discussions about long term deals with both Miguel Cabrera and Curtis Granderson, but talks with Granderson appear to be going better. However, talks with Granderson did not even get to length or money, which would suggest they are just getting a feel for what each other might be thinking. Granderson made 410,000 last season, and it isn't eligible for free agency until 2011. He has put together two pretty good seasons. Last season he set several records but the year before was just average, so a deal similar to what Grady Sizemore got seems likely, maybe a little less. I think if Granderson puts off contract talks till next off season he has a better chance of getting a bigger deal, assuming he gets better.

Twins still have offer for Santana: The Twins still have an offer on the table for Johan Santana, and it is believed to a be a four year deal worth 20 million dollars annually. I doubt he will take the deal, but it is possible because he has said he wants to stay. Personally, I believe no trade will get done because teams are becoming impatient with the Twins and by the end of 2008, Johan Santana will sign a record breaking deal with the Red Sox, Yankees, or Mets.

Phillips likes Reds style: After Brandon Phillips broke out in for the Reds last season, he is hoping they plan to keep him for the rest of his career. Phillips is in a very good spot right now with the Reds. They are on the verge of becoming very good, and he has a guaranteed spot. It makes sense that he would want to be there for a long time.

Orioles deny trade report: Typical. The Mariners must have jumped the gun on this one but it has to be going down. I think the Orioles are just not ready to make it official because money and the final prospect is still up in the air. We'll see.

Luis Gonzalez turns down Marlins: The Marlins offered Luis Gonzalez two million dollars for one year and he turned it down. He is going to be lucky to find a job if he is turning down those kinds of offers.

Red Sox might trade pitcher anyways?: The Red Sox do not like the idea of going with six men in the rotation and might shop one in hopes of landing a big time outfielder. I see this coming at the deadline if Manny Ramirez is not producing. Personally, I do not think numbers this year will warrant 20 million dollars next year, even if he hits 40 homeruns. Could trading Clay Buchholz land Matt Kemp, one for one? Maybe. My prediction is that Wakefield or Schilling will go down and Buchholz will substitute in after spending time at Triple-A and at the MLB level.

Upcoming interviews: I interviewed business guru and sports agent Adam Bierman, along with Director of Player Development Jerry Merz of XTS sports, but have yet to write it up. I talked with Jack Egbert of the White Sox today, and will type that up tonight or tomorrow. In the next couple of weeks, I will be talking with Yankees pitcher LaTroy Hawkins, Cubs GM Jim Hendry, Sports agent Scott Shapiro, Athletics prospect Aaron Cunningham, Diamondbacks pitcher Brandon Webb, and Hall of Fame Oriole Cal Ripken Jr! That is not all though, stay tuned!!