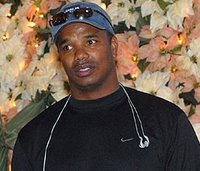 The White Sox have really struggled this off season to make a move, having missed out on top free agents Tori Hunter, Aaron Rowand, and Kosuke Fukudome, among others. They unloaded Jon Garland for a shortstop, a position that is already filled, and have failed to trade Paul Konerko or land a solid pitcher to compete in 2008. Although they acquired Nick Swisher, they have depleted their minor league system in doing so and do not have much of anything to say for themselves for the future. One Marlins executive believes players are turned off to Chicago because of how manager Ozzie Guillen treats his players and handles his clubhouse. From what I have heard, he is not afraid to criticize publicly, or get in your face if your struggling. Sometimes that is good, but obviously some of the players the Sox have courted do not think so. If they cannot get anything done this off season, it is possible we could see Kenny Williams be fired.

What is holding up the Orioles?: The Orioles could potentially land seven top prospects in two trades and clear some cash for the future if they just pull the trigger. What are they doing? How have they not done this. They are not ready next season to compete with the Yankees, Red Sox, or Blue Jays, possibly even the Rays, so they might as well. Their bullpen investment has failed and they could use the money and prospects for the future.

Hank Steinbrenner can't get away from media: Steinbrenner loves the attention he has been getting since taking over, and cannot seem to get way from the media. The place to be if you are a reporter is outside Yankee stadium, because it seems every other day Steinbrenner has something to say. Just last week he was saying how he wants Santana and is willing to pay him. Now he is saying he is no longer willing to go seven years or trade prospects for him. He is getting ridiculous if you ask me.

Tigers lock to win AL Central?: I think so, but John Morosi doesn't. The Indians have very strong pitching and the Royals are expected to turn some heads, at least change some standings.

Jason Hirsh expects big season: With a lot of running, good diet, and constant workouts, Rockies pitcher Jason Hirsh believes he is in for a big season. That would be good for the Rockies, who are hoping to repeat for the Wild Card.

Brewers like Cameron: I talked about a couple days ago, but it seems something is finally happening. I think Cameron would be good for the Brew Crew, and if you scroll down, you will see why.

Pirates still hope to deal Bay: The Pirates are still looking for a taker for Jason Bay. I think they are waiting for a team that misses out on a bigger play to jump in and make a move. The White Sox are no longer interested, so I would consider the Indians as the number one team right now.

How to beef up asking price: Pretend like you are not ready to trade him. Read this article from the Pioneer Press. The Orioles are doing it right now and the Twins have caught on, take a look.

Next Radomski?: Former Cubs trainer Tony Garofalo might be asked to talk with Senator George Mitchell about amphetamine and drug use in the clubhouse during his time with the Cubs. He was with them from 1977-1986.

On the comeback: Free agent pitcher Matt Mantei is attempting to make a comeback with the Tigers.