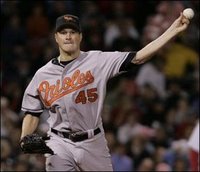 According to FOXSports.com, the Mariners and Orioles are progressing in talks for Erik Bedard. The Orioles goal is to acquire a solid center fielder and could possibly do so if they land Adam Jones. Orioles acting GM Andy McPhail pulled Erik Bedard off the market to get more from a desperate team like the Mariners, and it seems to have worked. However, this does not mean that the Orioles are going to trade Erik Bedard. The Baltimore Sun is reporting that the Cubs and Orioles are still talking about a trade that would send Brian Roberts to the Cubs for an outfield prospect and two other prospects, probably pitchers. My guess on the hold up of that trade is that the Orioles are asking for Felix Pie, and the Cubs are just not ready to give him up yet. However, they do have a solid prospect in Sam Fuld, and have Tyler Colvin waiting in the wings as well. Roberts would be huge for the lineup, and all it would do would push incumbent second baseman Mark DeRosa to playing less second base, and more center field. But they have invested a lot in Pie and are not ready to just give up for a big name player. A trade to the Mariners would definitely help their rotation, which was already improved by the addition of Carlos Silva. The Mariners are not willing to part with pitcher Brandon 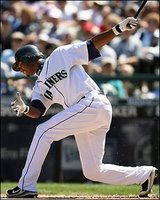 Morrow, but could offer something very good that would please the Orioles. Personally, I think the Orioles will ask for both Jones and Morrow, but might have to settle for Jones along with several other top prospects. Also, it seems that the Orioles are more willing to part with Bedard than Roberts because owner Peter Angelos is a big fan of Roberts and does not want to see him leave. Both of these trades are back on now after talks were called off last week, so we will have to wait and see happens. If anything happens, it will probably happen by the end of the month so they can prepare with their new team for Spring Training.