Padres' Young Someone to Watch

Share All sharing options for: Padres' Young Someone to Watch 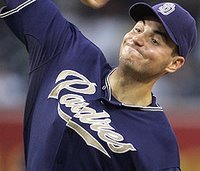 Padres pitcher Chris Young has always been a good pitcher, but has done something different with his workout to put him over the top. Young was 9-8 last year with a 3.12 ERA in 30 games, but is 35-22 with a 3.68 ERA in four major league seasons. This offseason, he added pilates to his work outs to increase core strength, and has been working consistently in hopes of having a solid, healthy season. Young has always had the 'stuff' to be a successful pitcher, but has not put up numbers that get him noticed like other pitchers. If he can increase his arm strength and push later into games, he will be quite a 1-2 punch with Jake Peavy. Peavy's style is much more side-to-side while Young, who happens to be 6-10, is much more up-and-down. As you prepare your fantasy teams, star Young's name as someone to snag in the later rounds.