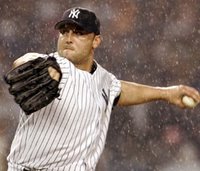 Pirates GM Neal Huntington has cooled on signing Johnny Estrada and appears ready to go with catcher Ronny Paulino behind the plate. They had interest in Michael Barrett, and Miguel Olivo before he signed with the Royals. Paulino is a catcher I would look out for if you have started preparing your fantasy rosters. He had a solid first year and is making adjustments to better prepare himself for major league pitching. I think the Pirates are smart to give him another shot. The Pirates are also expressing interest in signing Ron Villone. Villone was their Opening Day starter back in 2002, and he should serve as a solid reliever in the bullpen. He has a lot of experience playing in the NL Central which should help some of the younger guys in the bullpen. I'm not expecting much from the Pirates this year, but they do have some solid players who are still developing that could effect the standings in a couple years.