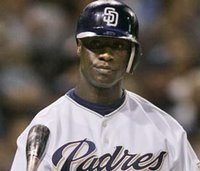 Sorry I'm a little late on this one. The Yankees, among other teams, are in talks with free agent outfielder Mike Cameron. Although you may think that that makes them the front-runners, why would someone who wants to be a starter go to a team with two legitimate starters, Melky Cabrera and Johnny Damon? Yes, one could be traded at any moment but Hank Steinbrenner has already said they are out of the Santana race, but that could easily change tomorrow. Cabrera could probably land a very solid pitcher, but I have heard of no such talks. Cameron is also being pursued by the Brewers, and it seems there is a better chance that he will be a starter there, than in New York. I think the Brewers have a better chance to land him than anybody because they have an opening, and have a very good chance to take the division, at least better than the Yankees.

However, it is also being reported that the Cubs are interested in Mike Cameron playing center field, an indication that they might not be ready to play Felix Pie everyday. If the Cubs do make a play, it might be a tough call between the two. He has played well at both stadiums, and there doesn't seem to be any former teammates on either team that could lure him to one or the other. However, Mike Cameron was managed by Cubs manager Lou Piniella in Seattle, and that could play a huge factor in his decision. If the Twins decide not to trade Santana, which seems unlikely now, they could make a play for Cameron to be their everyday center fielder. We'll see what happens, but I see this coming down to the Brewers and Yankees, with the Brewers as my front-runner.

UPDATE: BREWERS SIGN MIKE CAMERON TO A ONE YEAR DEAL.