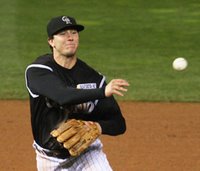 The Rockies and Troy Tulowitzki have agreed to a six year extension worth 30 million dollars. The deal, which is pending a physical, is the largest deal for any major leaguer under two years experience. This is a great deal for the Rockies who now can focus in on other young players to lock up like Brade Hawpe or Garrett Atkins. Tulowitzki batted .291 with 24 HR and 99 RBI and led all shortstops in fielding percentage, assists, and double plays turned. I think the future of the Rockies is not Matt Holliday, mostly because his agent is already pushing him towards the market. And although I think it is best for Matt Holliday to stay in Colorado where he will excel in power, the money might pull him elsewhere. If they can lock up Ubaldo Jimenez, Brad Hawpe, and Garrett Atkins, I think they will have a solid group to take into the future. They have Jayson Nix, who is already showing potential, and in the rotation they have Francis, Morales, Jimenez, and Hirsh, along with Aaron Cook. The Rockies are in a tough division, but there is no doubt in my mind that they will compete the whole way through.