Share All sharing options for: Rockies May Trade Holliday 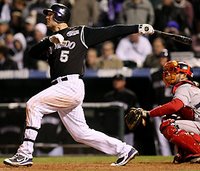 Talks between Matt Holliday and the Rockies appear to be over. Now, it looks like Matt Holliday will finish the next two seasons with Rockies and then head for the open market. However, if Holliday puts up another great year, it would make sense that they would try and trade him. Holliday could easily net three or four players, and that could help a team like the Rockies. However, Holliday is a very good player when he plays 81 games at Coors Field. The high altitude really boost his numbers compared to one the road. I think Holliday is still capable of putting up good numbers, but teams should be careful before they trade away several prospects. Holliday hit .301 with 11 HR in 76 games on the road last season, which doesn't transform into the impressive numbers he has put up in Colorado over the years. In 276 career games on the road, Holliday has hit .273 with 34 HR and an OBP of .333. In 286 games at home, he has nearly doubled in homeruns and hit .90 points higher with an OBP of .425. Boras is asking for about 19 million dollars a year, and if he was playing anywhere else, he would not making anywhere near that. However, I think the Red Sox, Yankees, Phillies, and Mariners will be some of the many teams interested.