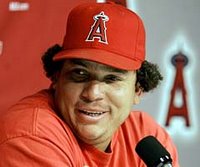 According to sources who requested not to be named, the Royals are impressed by Colon's play in Winter League and are interested in bringing him in in 2008. I think it would be a solid pick up for the Royals, who are looking for a veteran to help some of their young pitchers. In 2005, Colon went 21-8 with a 3.48 ERA and 157 K. Since then, he has gone 7-13 with a 5.72 ERA in 29 games. Colon is still working to get his arm strength up and is just 34, so he still has time to make a successful comeback. Not only that, but Colon had nine straight double-digit win seasons, so he could really help the Royals. I think they should make an offer for Colon. If they signed him, they would have Meche, Bannister, Greinke, Colon, and either Hochever, Davies, or De La Rosa. I think the Royals would like to see him play more in Winter League before getting a deal done, so expect something probably in the next two weeks.