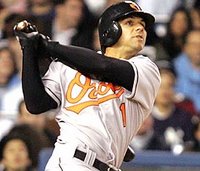 I called around early this afternoon to find out more about the supposed Brian Roberts trade. From what I have heard, they have talked over the past week about a trade, but the Orioles continue to ask for a lot of highly regarded prospects. It is being reported by Dave Kaplan through his blog that the Orioles like Tyler Colvin, along with Rich Hill, but the Cubs are not interested. Orioles President Andy McPhail knows the Cubs organization top to bottom and knows what kind of players develop well with the coaches that are assigned down there. I talked to a well placed Cubs executive who said the Cubs have a lot invested in Felix Pie and do not have any intention of dealing him. Dave Kaplan says that Jim Hendry will not deal Rich Hill, which makes Hill and Pie off limits, two players the Orioles are believed to be asking for. Colvin was drafted in 2006 and is already in Double-A and thriving. It seems that the Cubs are not interested in acquiring a top leadoff hitter by depleting their minor league system. However, if they can come to a compromise, maybe they can agree to trade low-level prospect Tony Thomas or Eric Patterson instead of Cedeno, that might get a deal done instead of trading Hill. Although Cubs fans would probably love to see Roberts in a Cubs uniform, I do not think they want to ruin the back end of the rotation to do so. However, he is an All Star with two years left on his contract that makes the Cubs the favorites in the Central in 2008.

When I was in Nashville for the Winter Meetings, I learned that the Cubs had interest in Chone Figgins, but only if he would play center field. If the Cubs land Roberts, I think the Cubs interest in Figgins would jump, and could lead to a quick trade possibly involving Felix Pie, but probably just Donnie Veal. I'm not sure what the Cubs would have to give up or how many players, so this deal, if any, seems far away. A lot more will be determined if they acquire Roberts, and what they plan to do with Mark DeRosa.