Share All sharing options for: Twins Ready To Trade Nathan? 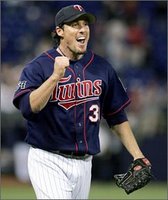 According to TwinsCities.com, the Twins are looking into trading closer Joe Nathan, who is set to be a free agent next season. This was brought up at the beginning of the off season but nothing has been done about it since the Johan Santana talks started. Nathan, 33, was 4-2 with a 1.88 ERA and 37 SV last season for the Twins. Since 1999, Nathan is 43-18 with a 3.00 ERA and 161 SV in 395 games. One reason they might be wiling to trade him is because they have several young prospects who could take over at closer, one of them is reliever Pat Neshek. I talked to a scout who thinks the Cubs are a good fit for Nathan. The win now mentality and prospects they have make them a possibly choice. Not only that, but he says GM Jim Hendry usually pulls the triggers on trades where there is little damage done to the team. So if he is able to exchange two to three prospects for someone with one year left on his contract, he probably would do it. Any trade involving the Cubs would probably involve pitching prospect Donnie Veal, along with players Kevin Hart, and Josh Donaldson. However, the Twins are known to ask for a lot in trades which might push out most teams. Still, I expect the Orioles, Giants, and maybe Braves to be interested.