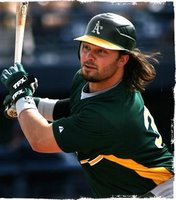 Today, the Oakland A's traded Nick Swisher to the White Sox in exchange for Ryan Sweeney, Gio Gonzalez, and Fautino De Los Santos. Although the White Sox acquire a switch hitting outfielder who is signed through 2012, they give up three top prospects who are nearing the MLB. "Nick is a quality switch hitter who consistently gets on base, hits for power and drives in runs," White Sox general manager Ken Williams said of Swisher. Gonzalez, 22, finished 9-7 with a 3.18 ERA in 27 starts for Double-A last season. He struck out 185 in 150 innings, but was an unlikely candidate to make the White Sox rotation in 2008. De Los Santos, 21, was 10-5 with a 2.65 ERA in 26 games between Class A Kannapolis and Class A Winston-Salem. I don't see these guys making the roster to start the season, but Beane has done his job this off season to set up the A's for the future.