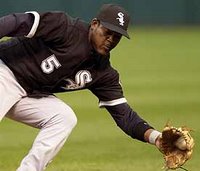 The White Sox are starting to understand that the trade for Orlando Cabrera really does not make sense. It put Juan Uribe out of the lineup and with him making about five million dollars, they do not want to keep him on the bench. They began shopping him a little over a month ago but found no takers because all teams that may be interested are also interested in Nationals shortstop Felipe Lopez, who also lost his starting job. The only teams I see interested are the Orioles, Cardinals, and maybe the Red Sox. However, the Orioles have had interest in Felipe Lopez for awhile and are caught up in big trades involving Erik Bedard and Brian Roberts, so pursuing a trade for Juan Uribe might distract them. The Cardinals recently signed Cesar Izturis but there is no guarantee he will be starting. By adding someone like Uribe, they would have a successful platoon, but doubt that will happen. The best possibility, although still very unlikely, seems to be a swap of Juan Uribe for Coco Crisp. Crisp has always been a favorite among White Sox executives, and acquiring him would give them an experienced center fielder. I think the White Sox are stuck with Uribe for the 2008 season which is unfortunate because it will only lead to more frusteration in the Front Office, clubhouse, and stands.