Breaking News: Schilling Out For Season?

Share All sharing options for: Breaking News: Schilling Out For Season? 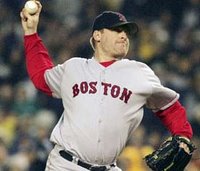 Breaking news out of Boston is that Red Sox pitcher Curt Schilling had a major shoulder injury and may miss the whole season. FOXSPORTS.com is reporting that the Red Sox considered voiding the contract for 2008, but no word yet on whether or or not it will happen. His doctor has suggested surgery because the injury is apparently much more severe than it was last season which sidelined him for a month. It is believed by most that Schilling would retire after this season, so it would make sense that if this injury is severe, that he would retire. You can also see where the Red Sox are coming from by wanting to void his contract. Schilling was 9-8 last season with a 3.87 ERA and 101 K, but his postseason performances make those numbers a lot better.

I do not think this will effect the Red Sox too much. They had six starters to begin with, and this injury only opens a spot for Clay Buchholz. You hate to see this happen though but Schilling was definitely on the decline. I do not have the specific details on the contract, but if the Red Sox are allowed to void his contract, I wonder who would pick him up. I do not doubt a team would give him an incentive like contract. He might only stay with his list of twelve, and if he does, maybe he would return to Arizona.