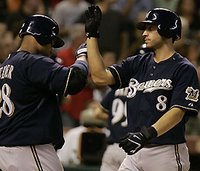 Brewers manager Ned Yost is considering a lineup that would have Jason Kendall batting ninth and Ryan Braun and Prince Fielder hitting second and third, respectively. Yost wants Braun to get more at-bats and thinks if he were in the two spot, the second and third time through the lineup he will have opportunities to drive in runners. This would also allow for Fielder to hit like he was in the cleanup spot. Although the idea has a good chance to work with their kind of lineup, it does put a lot of pressure on the 5-6-7 guys to get on base. If they are unable to get on base, it completes ruins the idea and will allow teams to limit Ryan Braun's potential damage. Furthermore, the Reds always start off very strong in April and early May and if the Brewers struggle, they will have a much harder time coming back. Not only that, but if the Cubs start off strong with new acquisition Kosuke Fukudome and rookies Geovanny Soto and Felix Pie finding their swing, it would put a lot more pressure on Milwaukee to stop the idea and adjust quickly. I think it is a good idea, but a good idea later in the season after players find their step.

Word coming out of Brewers camp is that Braun's agent, Naz Balelo, is working on an extension for Braun, similar to the one Troy Tulowitzki got. "It's certainly something I am open to, but I honestly haven't thought about it too much yet," Braun said. "I'm definitely not opposed to considering whatever they have to say." The meeting was informal, but positive, according to officials. I do not expect something to get done before the season starts, but something next off season seems likely.