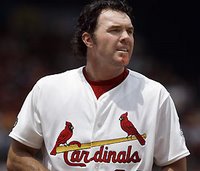 An arrest warrant for Scott Spiezio was issued today on six charges dating back to December. Spiezio, who did not play in Wednesday's opener, allegedly drove under the influence, and was involved in a hit and run, aggravated assault, and assault and battery. Because of this, the Cardinals released him in response to the charges. Spiezio has had a rough couple of seasons with the Cardinals. Last season, he was place on the restricted list so he could be treated for a "chemical dependency." "We hope Scott will continue to seek appropriate help and wish him the best in baseball, but more importantly in life." General Manager John Mozeliak said. In 200 games as a Cardinal, he has hit .270 AVG with 17 HR and 83 RBI. Not a terrible line, but certainly not worth keeping him around if he will be a distraction. With Spiezio off the roster, possible fillers include Josh Phelps, who hit .306 with 7 HR in 94 games, Juan Gonzalez, D'Angelo Jimenez, or one of the younger guys. We have a long way to go this Spring, and I think this problem will work itself out.