Share All sharing options for: Cubs Still Trying To Deal 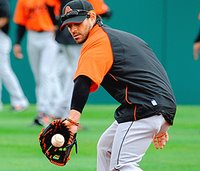 According to the Chicago Tribune, the Cubs would still like to make a trade before Opening Day. They are reportedly sending scouts all over Arizona to look at players, and you know they have scouts in Fort Lauderdale covering Brian Roberts. The Cubs saw a lot from some of their younger players in their opening day win over the Giants, but I think they are set on making a move. Before I get to Brian Roberts, the Cubs are having internal discussions about Coco Crisp. Crisp has been pushed out of a job by young outfielder Jacoby Ellsbury and has told the Red Sox he would like a trade. The Red Sox have approached the Braves, Rangers, Padres, and Cubs, among others, about Crisp, but nothing is really brewing just yet. Probably because he hit .268 with 6 HR in 145 games last season, but also because he has got 10.5 million dollars left on his contract through 2009. One reason why I do not think the Cubs will make a move is because Felix Pie or Sam Fuld will be ready to take over everyday by 2009, if not this season. Felix Pie flexed some muscle today in the spring opener, and is the leading candidate in center. Another reason is because Crisp has little to no experience in the NL and a switch to the NL and to Wrigley Field might affect his numbers.

Now to Brian Roberts. Roberts had a great Spring opener as well but talks won't stop. The Orioles have sent scouts to the Cubs complex in Mesa to get a closer look at players that might be in the deal, and if the Orioles like what they see, we could see a deal get wrapped up pretty quickly. The Baltimore Sun believes Ronny Cedeno and Sean Gallagher will be apart of the deal, along with at least two other players. As for the other two, possibly Matt Murton. Lou Piniella was talking him up to reporters a couple days ago, but I do not think that has too much significance. As for other players, minor leaguer Tony Thomas could go to Baltimore. He is a solid second baseman with a lot of speed to burn. Roberts doesn't seem to worried, and I do not think we should be, for now.