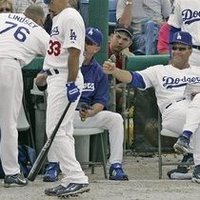 New Dodgers third base coach Larry Bowa is protesting the rule requiring base coaches to wear helmets. This is a result of the death of former first base coach Mike Coolbaugh from the Rockies system, who was struck in the head by a fall ball this past season. "I'll really make a joke out of it," Bowa said. Bowa went on to say that he will take the fine for 162 games, because he will not do it. Personally, I think Bowa and Dodgers management for not enforcing this are disrespecting the Coolbaugh family, the Rockies, and Major League Baseball. What is the big deal? Is he trying to make a fashion statement? I understand that they may be uncomfortable, but I think they should at least respect the rule for the sake of the Coolbaugh's. I have a lot of respect for Larry Bowa, but I think he is wrong to openly reject the rule before the season even starts.