Former Number One Pick To Braves?

Share All sharing options for: Former Number One Pick To Braves? 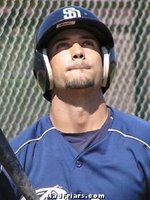 Former Padres number one pick Matt Bush, who recently converted to pitcher, might be on his way to Atlanta. Bush, who was originally drafted as a shortstop, injured his arm just after taking up pitching. However, Padres GM told me during our first interview that Bush was clocking out in the high-nineties, so he still has potential as a major league pitcher. I do not think this move will have much effect on either team. Bush throws hard, and could make out to be a closer if he can stay healthy. He will be back in 2009, and if he stays on track, could see some MLB time by 2011.