Share All sharing options for: Howard Looking For Big Extension 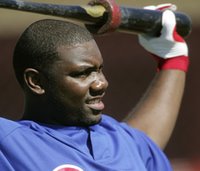 According to the Philadelphia Inquirer, Phillies first baseman Ryan Howard is looking for a deal more than the eight year, 136 million that Alfonso Soriano got. In the year Soriano got that contract, he hit .277 with 46 HR, 95 RBI, 41 SB, and 160 K. This past season, Howard hit .268 with 47 HR, 136 RBI, 1 SB, and 199 K. Those numbers are pretty similar, and if Howard does it again I assume the market will take him up to a something like a ten year deal worth 20 million dollars annually. Personally, I do not know if the Phillies will take that kind of contract under their wings, but they might be able to sign him to a short term extension to buy out some of arbitration, and then trade him during the 2010 or 2011 season. Howard does not seem to set on his future, so I think he will explore the waters just for the experience. The Phillies plan to go year by year with Howard, and might take him to arbitration one or two more times before considering a big extension. So we are obviously far from a resolution here but this could turn into an ugly situation if something is not settled soon.