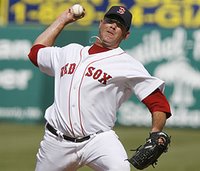 The Indians have agreed to a one year deal with pitcher Brendan Donnelly, according to ESPN.com. The deal is a minor league deal mostly because Donnelly will not be ready till June or July, but it is a solid signing nonetheless. Donnelly was 3-1 wit ha 3.05 ERA this season but is 25-9 with a 2.88 ERA in 303 career games. I think the acquisition of Willis and Cabrera makes people think that the Tigers will win the division for sure, but the Indians won 96 games last year, and they keep adding players that may turn out to be solid pickups down the road. Some believe that when you put together a team like Mark Shapiro has and then go and win 96 games, you should look to get better. I agree with that to some extent, but I think a team with good talent and solid chemistry will win more ball games than a team with just talent. Shapiro has improved his bullpen, but other than, has not made much changes on the field, and I think that they will benefit from that.

Interviews: I am in the proces of getting two interviews for you: one is about the sports agency, XTS Sports, and the other is with A's GM Billy Beane, who I met down at the Winter Meetings. I will also be talking with LaTroy Hawkins this weekend, among others over the next couple of weeks leading into Spring Training.