Share All sharing options for: Interview with J.R. Towles 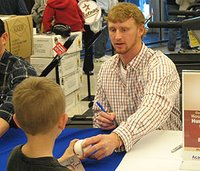 Back in October, I called a representative of Astros catcher J.R. Towles to see if he would be up for doing an interview. At the time, he was busy in Fall Ball, but when he was called back by the Astros, it was just a matter of time before we got something done. Towles is currently in line to be the Astros starting catcher next season. He played very well to end the season for the Astros, including an 8 RBI game, and he has made people feel pretty good about the future behind the plate for the Astros. I want to thank him again for doing this interview for me, I really appreciate it. I also want to think his representative, Wes Towles, for doing for me as well.

ELI: You were drafted by the Athletics first, but chose not to sign. Why was that?

J.R.: Well the first time they drafted me it was just to have my rights, we didn't talk. The second time, we negotiated, but I wanted to get bigger and stronger, so I went to junior college.

ELI: So when the Astros came along were you ready to sign?

J.R.: Oh yeah, I was ready to go play pro ball, especially for my hometown team.

ELI: Was it hard making the adjustment from aluminum to wooden?

J.R.: It was definitely different. With aluminum bats, there is more room for error. But, you know, I made adjustments, it was good.

J.R.: I really wanted to get bigger, and also be able to withstand a full season. Looking back on it though, I think I did a little too much. I think I started to prepare too soon.

ELI: Was it hard to get comfortable playing at several different levels in 2006?

J.R.: The biggest thing was that I didn't have any clothes. They told me when I was called up to Double-A that I would be up for two weeks. I basically had to live out of a suitcase. On the field though you had to figure out the pitching staffs, which didn't take long, but it was just something to adjust to.

ELI: As a catcher, do you like to call the games or do usually let the pitcher call it?

J.R.: It depends on the pitcher. I'll make a suggestion on what I think is good in the situation, but he can always shake it off. If there is a runner on first, maybe I'll call for a sinker to get a ground ball.

ELI: Do pitchers change up their signs or are they pretty much the same throughout?

J.R.: Most pitchers just use the same signs, but if there is a runner on second looking in he might change them up.

ELI: What was it like playing in the Futures Game last season?

J.R.: Oh, it was great. To play at that level in front of that many fans was great. Not only that, but I was there representing the Astros.

ELI: In 2007, you played at just about every level, can you tell me a little about the experience?

J.R.: Yeah, I was very fortunate. The Astros are known to bring their players up level by level. So when I was at Double-A, I was not expecting a September call up. But, rumors were spreading that I might get a September call up so when I got to Triple-A, I told myself that I was going to get a call up. It was very cool.

ELI: What was the clubhouse like when you got there?

J.R.: Well, I knew some of the guys so it wasn't bad. I knew Chris Sampson, he was my college coach. I knew Berkman, so these guys took me. They are all great guys though. I mean, you know about the whole dress up, but that is part of the deal. They all treated me really well.

ELI: Can you take me through the at-bat where you got your first hit?

J.R.: Yeah, I was 0-2 on the day. In my third at-bat, I was ahead in the count and I thought I had a fastball coming out and away. I got it and was able to hit it well, and then I was able to keep building off that. I kept hitting and kept getting RBIs.

ELI: Speaking of RBIs, can you tell me about the game where you had 8 RBIs?

J.R.: Yeah I was 3-3 in the fifth inning with I think, 5 RBIs. After I got that double, I knew it was going to be a special game. It was cool, we kept scoring, they named me Player of the Game, it was great. I thought it was great and all after the game but when they told me I set a franchise record, I realized how special it really was. You know, Bagwell, Biggio, Berkman, all those guys have been here so long, so yeah, it was pretty special.

ELI: If you could catch for one pitcher, from the past or present, who would it be?

J.R.: Probably Nolan Ryan. He is a Hall of Famer, he has got the most K's, all those no-hitters. He is a great guy, and he was once an Astro.