Share All sharing options for: Interview with LaTroy Hawkins 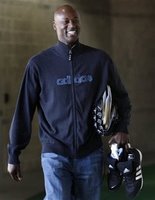 Today, I had the chance to talk to veteran pitcher LaTroy Hawkins. Hawkins is a Yankee relief pitcher, but was apart of the Rockies last year, and the Twins in the early 2000s that made the playoffs. He is a class act, who is likely to set up for closer Mariano Rivera. He was nice enough to take some time away from his busy Spring training schedule to answer some questions for me. I want to thank him and Mike Dillon of Reynolds Sports Management for setting this up for me, I really appreciate it.

ELI: You played baseball, basketball, and ran track in high school. Which was your strongest sport at the time?

LaTroy: Basketball. But I couldn't go pro in the NBA, maybe somewhere else, but not the NBA.

ELI: Was there any doubt in your mind that baseball was not the path you were going to take?

LaTroy: No, not really. My grandpa said baseball was my best sport so I took his word for it.

ELI: Back in 1994, you played in A, AA, and AAA. Do you remember what kind of adjustments you had to make to continue doing well at the higher levels?

LaTroy: I just kept doing what I was doing. Throw strikes, limit walks. I had a solid defense which was good to have and it worked to my benefit.

ELI: Can you tell me about when you were called up? How were you told? Where were you?

LaTroy: I was taken out of Spring Training. They extended the rosters coming off the strike, so we had thirty players for the first two weeks. So that is how I got my big league review, off the expanded rosters.

ELI: 2002 and 2003 were great years for you. What sorts of things were working well for you those years?

LaTroy: I was comfortable in my role. I was able to throw a lot of strikes, get a lot of ground balls. I was thinking ahead in the count. I could get the ball down and away on lefties and righties, so I was hitting my spots well.

ELI: You were a free agent in 2004, what was the experience like for you?

LaTroy: It was cool. A lot of teams wanted me, a lot were interested in my services.

ELI: This past season, you got out and helped the grounds crew with the tarp during that storm. Was it hard to handle?

LaTroy: No, it was not a big deal. I was out there for probably five minutes. Some of those guys were out there for twenty. I got a lot of credit for nothing.

ELI: What was the Colorado clubhouse like during the late season playoff run? Were a lot of guys superstitious?

LaTroy: You know, if you play well, good things will come. If you don't, bad things will come. Everyone was pretty excited. We started off poor, found every which way to lose, and now we were finding new ways to win. It was great.

ELI: You pitched in the playoff game against the Padres, how were you feeling after pitching a scoreless inning?

LaTroy: I felt good. That was the greatest game I have ever been apart of. I was there for David Wells' perfect game, but the energy, emotion of this game was different. I had all my adrenaline pumping. We knew they had no shot, they were down and out at that point.

ELI: You nearly signed with the Yankees back in 2004, was it pretty easy getting a contract done because you understood where they were coming from?

LaTroy: It is always easy with the Yankees. They don't mess around. If they want you, they will get you.

ELI: What is the typical Spring Training day like for a relief pitcher?

LaTroy: You have to be dressed by 10:15, but guys get there earlier to do their own workout. Then, we stretch as a team. After that, we do fundamentals: run downs, pop ups, ground balls, stuff that might happen during games. Then you do some individual stuff. Someone will hit the ball to first and you will run over and cover it. There are three stations of that. Then you go over signals, like for pitch outs. Then you do conditioning and that is when all the pitchers run together. Then you are done, but most go and work out individually in the gym.

ELI: You have pretty good deception, at what time in your career did you really work to make that better?

ELI: Do you have a favorite stadium to pitch at?

ELI: If you could give out one piece of advice to young, aspiring pitchers, what would it be?

LaTroy: Take care of your arms.