Jason Marquis On The Block?

Share All sharing options for: Jason Marquis On The Block? 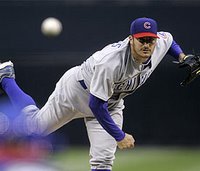 According to one AL executive, the Cubs are shopping Jason Marquis to teams in hopes of adding a reliever, or pair of prospects. Yes, this is old news, but it appears that the Cubs would like to give Sean Marshall a shot in the rotation after an impressive showing last season. The Orioles are an option if the Brian Roberts trade goes through. Giving the Orioles a veteran pitcher in Marquis, along with Sean Gallagher, Ronny Cedeno, and a position prospect, might get a deal done faster than people think. The Twins are looking to add a veteran pitcher and would probably be willing to trade a reliever and a prospect for Marquis. Other than those two teams that are desperate for pitching, I see the Astros possibly inquiring, but the Cubs won't bite unless the deal is good. The Cubs aren't ones to dump players within the division. I doubt any trade gets done before Spring Training; I see something getting done in May if he really struggles or at the deadline if he is pitching like he was last season.