Share All sharing options for: Joe Blanton Not Going Anywhere 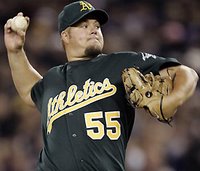 Rumors are flying that the Atheltics and Reds are talking a trade that would send Joe Blanton to the Reds for at least four prospects. However, that is not true. A source inside the A's said that they have talked, but it is not what the A's are looking for at this time. I think this means that the Reds are looking to offer up a deal like the Twins got from the Mets, and the A's would never take that. Not only do the A's have no problem holding on to Blanton, but they also have no problem with the draft picks. Obviously they prefer to get prospects, but if you can't get the top ones you are looking for, then it is not worth it. I think the A's might be looking at Homer Bailey and Joey Votto, along with two other prospects, but I have not heard any names. If I were the A's, that is the kind of deal I would try and pull off. I think the A's need Blanton to anchor that rotation next season, at least up until the trade deadline. If the market picks up, maybe we will see him go to a contender.

According to the Denver Post, the Dodgers have interest in Joe Blanton. However, the A's are looking to reacquire Andre Ethier, along with Andy LaRoche and two other prospects. They could probably get Etheir, along with three other prospects, but not Etheir and LaRoche. We'll see, but I doubt this is going to happen.

Other pitchers that are being shopped:

Jason Marquis, Cubs: He will only be traded before season if it is to the Orioles. Otherwise, I expect a trade around the deadline, if not sooner. The Cubs do not have much confidence in Marquis despite 11 wins last season, and it will probably hurt them to start the season.

Chris Capuano, Brewers: Capuano is the odd man out in the Brewers rotation now that they suddenly have a army of starting arms. Young arms. Capuano could probably get them a solid bench player, someone like Daryle Ward, or possible a young arm to add to the system. I do not see the Cubs and Brewers trading pitchers though.

Horacio Ramirez, Mariners: With the Mariners acquring Bedard, it puts Ramirez out of a spot. All Mariner fans can take a breath. If Ramirez can do well out of the bullpen, he might be able to net something that could help the Mariners, to some degree. Otherwise, he might just be optioned.