Share All sharing options for: Juan Uribe to Baltimore? 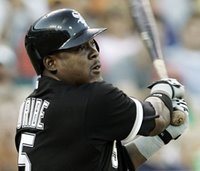 The White Sox report to Spring Training in two days and questions are already brewing about what to do at shortstop. After Juan Uribe gave the White Sox a hometown discount, the White Sox went out and acquired a solid shortstop in Orlando Cabrera. It is obvious that he will be their shortstop barring a serious injury. So what to do with Uribe? He is making 4.5 million dollars, too much to put him on the bench. And they have a second baseman in Danny Richar and a DH in Jim Thome. So what can they do? One AL executive said that he would not be surprised if the Orioles made a move, especially if they do not trade Brian Roberts. Uribe hit .234 with 20 HR and 68 RBI while Luis Hernandez, who played in just 30 games, hit .290 with 1 HR. Hernandez may be the future at shortstop and if the Orioles are trying to get younger, it wouldn't be smart to bring in an another aging player. I think a trade involving Juan Uribe will happen in the first week or so of exhibition games. I do not think the White Sox want the unrest in the clubhouse while everyone is trying to get comfortable and in to in-season form.