Mench to Bronx, Clark to LA?

Share All sharing options for: Mench to Bronx, Clark to LA? 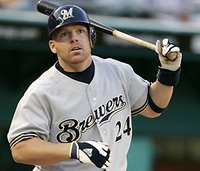 The Yankees continue their search for a right handed bat and have contacted outfielder Kevin Mench. Mench had great power early on Texas hitting 68 homeruns in just 423 games. Once he joined the Brewers his power dropped and he fell into a bench role. Still, he has the ability to play all three outfield positions if needed, and is pretty good coming off the bench. I know the Rangers had some interest earlier this week, but the Yankees might be able to lure him away if they offer a guaranteed deal. On the other side of the country, the Dodgers are looking for a lefty bench player and have approached both Mark Sweeney and Tony Clark. However, one NL executive said teams prefer Clark over Sweeney because of the effect he can have on a clubhouse in a positive way.

Twins cool on Fogg?: The Twins have reportedly cooled on Josh Fogg and are looking at other options, possibly Kris Benson. However, Benson is supposedly in talks with the Phillies. Fogg should have no problem finding a job though. I hear he is in talks with the Orioles, and has had recent discussions with another unknown NL team. If I had to speculate, maybe the Astros.