Share All sharing options for: News and Notes: Bedard To Mariners Close 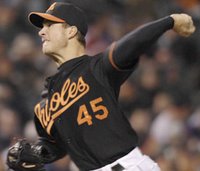 The Erik Bedard trade to the Mariners is pending physicals, according to the Baltimore Sun. The Orioles will be acquiring Adam Jones, George Sherill, Chris Tillman, Kam Mickolio, and Tony Butler in hopes of rebuilding the team for the future. I think this is a great trade for both sides. For one, it puts the Mariners back in contention with the Angels, and it gives the Orioles five solid players for the future. The pitchers the Orioles are acquiring are very big, strong guys, so if they are handled properly, they could really do some damage down the road. Does this mean a Brian Roberts trade is coming? Maybe. We will know by the end of the week if something is still brewing.

Perez to Phillies?: The Phillies are very interested in Odalis Perez, according to the Philadelphia Daily News. I think the Phillies might try and get him to a minor league deal, but we'll see.

Pirates To Trade Bay?: The Pirates appear unhappy with Bay's recent comments about the teams decision making this offseason, and it will probably lead to a trade. Although he is right, they probably do not want his negative attitude in the clubhouse. As for teams I expect to be interested, we could see the Padres or Indians jump in.

Would Braves trade Teixeira?: The Braves do not seem willing to sign Mark Teixeira to a long term mega deal and may look to trade him mid season. I think it could work, especially if a race in the AL East is close. I don't think Juan Miranda would stop the Yankees from trading for Mark Texeira.