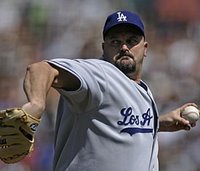 The agent of pitcher David Wells has put in a call to the Cardinals seeing whether or not they were interested. The Cardinals interest is lukewarm but could change if one of their pitchers does not perform this spring. "At this point, the Cardinals seem like they want to see how their younger guys look at camp." Wells went 9-9 with a 5.43 ERA and 83 K in 29 games last season, but finished the season going 4-1 with a 4.65 ERA. For the Cardinals, I think it would be a good signing. They do not have much depth and adding Wells, who wants to prove himself, could help the rotation and some of the younger pitchers who need guidance.

Johnson not stirring pot?: Blue Jays outfielder Reed Johnson has been shopped all offseason but there is no interest out there. Johnson has had back problems and maybe teams are waiting to see if he is okay before making a trade. Johnson hit .236 with 2 HR in 79 games, but when playing everyday he has showed he can hit for power and average.

Nathan likely gone?: Joe Nathan is looking for a Mariano Rivera like deal, and the Twins are not interested. I doubt Nathan is with the Twins next season.

Marlins should pay Ramirez soon: The Marlins should show the cash to shortstop Hanley Ramirez before his demands become too great. If they can lock him up to a deal slightly larger than Tulowitzki, it will allow them to lock up other players as well.

Mark Prior on the comeback: Mark Prior is excited about being with the Padres and a fresh start and it is showing by how hard he was working. Some Cubs fans I have talked to have said they are happy the Cubs do not need to worry about him, and hope he can do well, just not against the Cubs. That seems fair. I know a lot of Cubs fans did not like waiting and relying on him.

Sosa waiting for contract?: The agent of Sammy Sosa says they are holding out for a contract that guarantees him everyday playing time.

Mets trying to trade El Duque?: According to Jon Heyman, the Mets tried to trade Orlando Hernandez this offseason but found no interest. Maybe he proves he can perform maybe they will find a suitor and then sign Kyle Lohse in his place.

Milledge in for big year?: Nationals outfielder Lastings Milledge is ready to show that he can live up to his potential. But he is hoping to show the Mets more than anything. He believes the Mets did not ever believe in him.

Shawn Green closing in on a minor league deal?: According to sources, free agent outfielder Shawn Green is closing in on a minor league deal with an unknown west coast team. As for who it could be, I don't know. I thought maybe the Mariners but maybe the Dodgers would give him a shot to make the bench. Or the Padres, who are looking for a corner outfielder.