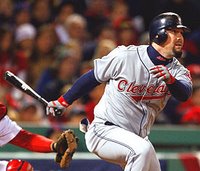 The Diamondbacks were impressed with Trot Nixon's offensive workout this past Sunday and are having discussions on whether or not to offer him a minor league deal. "We’ll probably make a decision whether to bring him in the next day or so, or at least making an offer, to the extent he might have other choices," general manager Josh Byrnes said Monday. Although Nixon hit several balls out of the park, the Diamondbacks have a lot of depth, and signing him might force the Diamondbacks to make room for him, which would take at-bats away from several players. Nixon, 34, hit .251 with 3 HR in 99 games, but would probably make for a solid bench player. There is no harm in bringing him in for an extended look, especially if they give Nixon the option to be released if he does not make the team at the end of Spring Training.

Quote of the week: "I just didn't see the door and jumped through it," he said. "I have small cuts everywhere." Hunter Pence cut his hand and legs, but should not miss major time.