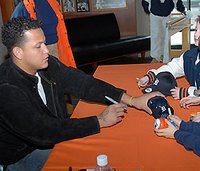 In retrospect, I think I picked the best time to start this website. It was on the verge of a big off season with several big name players asking for big time money. Trades were going around, signings everyday, people were just interested, and so was I. This off season, I came in with an optimistic feeling that they would be a lot of trades and not a lot of big signings. I was wrong. There have not been too many trades and there have been hardly any big signings. Yes, Johan Santana, Dan Haren, and Erik Bedard were traded. But they toyed with us all off season in getting a deal done. But with any off season, there are always winners and losers, and I am hear to break it down:

- Not only did they add Edgar Renteria to get their shortstop, but they acquired Miguel Cabrera and Dontrelle Willis to give them one of the best offenses in baseball. The bullpen is still weak, but the rotation and lineup should allow for the bullpen to make a couple of errors here and there. Obviously the Tigers went out to get a World Series and I would not be surprised if they were back playing October ball this October. After acquiring Willis and Cabrera, they locked up Willis, and are currently working on Miguel Cabrera. Aside from them, they signed Granderson long term, and also acquired Jacque Jones to play left field.

- The Mets kept pretty quiet this off season after their heart breaking collapse in the final weeks of the season. However, they played hard to get with the Twins and finally pulled off a huge deal to land the best pitcher in baseball, Johan Santana. Not only that, but they gave up four decent minor league players who are still unproven. I do not think this locks up the division, but it makes them a lot better than last season with just one major addition. Other notable additions are Ryan Church and Brian Schneider, who should adjust nicely to Shea Stadium after playing in D.C.

- Yes the Twins were able to unload Johan Santana but did not get anything in return that will help them significantly in 2008. If they had taken an earlier offer, they could have had Jacoby Ellsbury and four other prospects that were a lot better than the ones they got. With the trade, they have no number one starter with Liriano still in question and although they landed Delmon Young, did nothing to improve their infield by signing Mike Lamb and Adam Everett. In the division they are in now, I think they will be fighting for third, possible fourth if the Royals turn it around.

- Just a year after winning the World Series, the Cardinals finished in third place. They had no pitching, and did nothing this off season to improve that. Yes they added Matt Clement, but he has not pitched successfully in two seasons. Cesar Izturis is not the answer at shortstop, and hopefully Troy Glaus can perform at third. Who knows if Ankiel can repeat his impressive numbers now moving to center, and who is playing right field again? Skip Schumaker, or the rookie Colby Rasmus.

- To sign Andruw Jones to a two year deal worth 36.2 million dollars does not seem like a good signing considering he hit .222 with 26 HR, but that was obviously a fluke. He had 50 HR just two seasons ago. Yes, we can see his is on the decline but he still has two solid years left and if Dodger pitching can hold the line, I think they will be up for a playoff bid.

- Mariano Rivera is one of the best closers in the history of the game, but in no way did he deserve a three year deal. I am going to avoid the money and the type of player he is for one second. The Yankees are an old team and in order to compete with the Yankees, need to get younger. Signing him to a one year deal or even two year deal would allow them to go out and try and land someone like Joe Nathan or Francisco Rodriguez in the next off season. Instead, they are stuck with the closer who is expected to struggle.

- For the Giants, they are in no position to be injury prone players. The Giants are a last place team and keep signing players when they should be trading the good players they have left for younger players with better potential. Just not a smart signing on the Giants part.

- Wow. What a move by the A's. Not only did they acquire three solid prospects but they got rid of a decent player locked up for a long time. Don't get me wrong, I think that Swisher can perform, but not enough to help the A's. The White Sox traded away three players key to their future for one player who may or may not help. Big win for A's.

So what can we look for next off season? Obviously there will be more moves with a lot of good players on the market, but who might be traded? What will the biggest contract come out to?