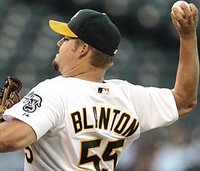 Buster Olney of ESPN.com writes today that there are several teams interested in Joe Blanton. With this new information, it makes it more likely that the A's would part with him to improve their team for the future. Of the teams he mentions, I think the Reds and Yankees are the front two. Followed by the Dodgers, and then the Red Sox, Phillies, and Angels. Although the Angels need a starter to replace Kelvim Escobar, they probably would not be interested in trading four prospects to the A's. The Reds have been interested all off season and if more teams start talking with the A's, they might need to offer Jay Bruce to secure the deal. As for the Yankees, they have been talking about going after Blanton but only if they trade some of their low level prospects. Do not expect Ian Kennedy heading to Oakland. One question I have been getting a lot in my email inbox is why is interest so high for Blanton? Personally, I think it is because right now, there is no better pitcher that is on the market. Also, the Athletics are not asking for too much that can hurt a team in 2008, but get a lot of prospects because they have a solid negotiation angle.

Blanton has been in double-digits every year since becoming an everyday starter, and has pitched over 190 innings each time. Not only that, but he is putting up 15 wins on average and is starting to enter his prime (28-32), so we could see his numbers improve. One reason why I do not think the A's would trade him just yet is because if they do trade him, they have no number one starter to anchor the rotation. However, if they were to trade him and then sign Livan Hernandez or Kyle Lohse to a one year 3-5 million dollar deal that would solve the problem. I see the Reds adding him if they do make a trade, but I also see the Angels adding a pitcher, maybe Jason Marquis, before Opening Day.