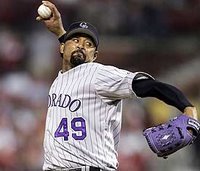 All off-season, new Pirates GM Neal Huntington has been searching for reliable setup man. However, Huntington is looking for someone whose asking price is fair: "We just don’t see anyone out there who provides good value for the prices that are being asked," General Manager Neal Huntington said. "We’re getting closer to spring training, so there is likely to be more of a sense of urgency on the part on some players and maybe they’ll drop their asking prices. Right now, we’re not going to spend $50,000 on a car that’s valued at $20,000." That's understandable, and probably likely that these pitchers looking for jobs would lower their price down to the level the Pirates are willing to pay. There are several solid relievers with good track records, but they are all over thirty-five and are less willing to take a minor league contract. I think bringing Jose Mesa back is an option, maybe Antonio Alfonseca. They are still in talks with Shawn Chacon, but he wants four million dollars for one year while the Pirates are offering two.