Roberts Talks Back On

Share All sharing options for: Roberts Talks Back On 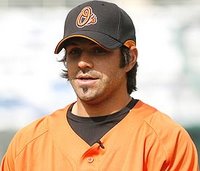 Sorry for the delay, folks. The cable is down in my neighborhood and I was not able to get online. Anyways, let's get back to baseball. With the trading of Erik Bedard, all focus is now on Brian Roberts as the Orioles will try to acquire more prospects for the future. From what I have heard, the Orioles and Cubs are working on several scenarios, hoping that they can mix and match to find the right one. However, do not think Sean Marshall and Felix Pie or Tyler Colvin will be in the same trade. The Cubs have already ruled that out. One possible scenario is Sean Gallagher, Donnie Veal, Matt Murton, Ronny Cedeno, and one fifth prospect, prehaps Roberto Hernandez, for Roberts. Personally, I would do this trade if I were the Cubs. Yes, Matt Murton will be a solid addition to their outfield or DH spot and Ronny Cedeno might break out as their shortstop, but Gallagher and Veal are very unproven players especially going to the toughest division in baseball. Not only that, but it gives the Cubs the leadoff hitter they need, and will put them back on top of the division for sure. And, the Cubs can live without those five players. They do have other solid prospects that can step into starting roles soon enough. The only problem I have with this trade from a Cubs standpoint is what to do with Mark DeRosa. DeRosa was very good for the Cubs last season and still has two years left on his thirteen million dollar deal he signed last winter. This immediately causes some tension in the clubhouse and forces DeRosa or Pie out of a job. And don't forget, it would make Fukudome pretty uncomfortable as well trying adjust to hitting and playing in one of the toughest outfield's in baseball. This is a win for the Orioles either way, who acquire five prospects and shed some cash. Even if the prospects are not the best, they put themselves in a position to compete in a couple of years.