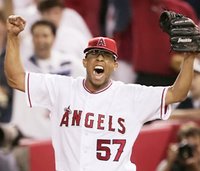 Angels closer Francisco Rodriguez is entering the final year of his contract and it sounds like if a deal is not reached by Opening Day, he will walk. Rodriguez, 26, went 5-2 with a 2.81 ERA and 90 K, but has recored 132 saves over the past three seasons. I think Rodriguez will be looking for at least fifteen million dollars annually over six to seven seasons. He is just twenty-six, and those demands do not seem too unreasonable. The Angels do not plan to trade Rodriguez just yet, but I'm sure they would if the right deal came along. The Angels have one of the best minor league systems and a pretty good draft record, so if Rodriguez does walk, they could take the draft picks and sign someone else. As for possible replacements, Brandon Lyon and Juan Cruz of the Diamondbacks, Rafael Soriano, and maybe Damasco Marte. Another possible replacement, although unlikely, is Japanese lefty Hirotoshi Ishii.