Share All sharing options for: Sabathia Cuts Off Talks 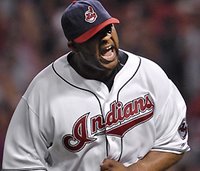 Indians pitcher C.C. Sabathia has decided to table contract discussions until the end of the season, according to his website. I am sort of surprised he wouldn't want to get a deal done but if he can make at least 130 million dollars on the market, it is understandable. Especially because teams like the Dodgers, Yankees, and Red Sox with a lot of spending money will be looking for starting pitchers next off season. Sabathia, who went 19-7 with a 3.21 ERA and 209 K, has said before he would like to stay in Cleveland, but because the Tigers have improved so much this off season with young talent, he might want to play for a team with a better chance of winning. Who knows, maybe he just wants to focus on baseball. Maybe he has other intentions. However, some pitchers do not do well when they are pitching without a contract, and he might feel extra pressure if he struggles. Personally, I think he will stay with the Indians. The Indians have the money, they just need to meet Sabathia half way.