Sweeney To Padres, Wilson To Mets?

Share All sharing options for: Sweeney To Padres, Wilson To Mets? 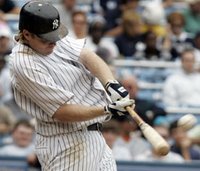 According to the KC Star, Mike Sweeney worked out at PETCO Park in San Diego on Tuesday, but no word yet on how it went. I put in a call to his agent, but it was not immediately returned. Sweeney hit .260 with 7 HR and 38 RBI last season, but is a .299 career hitter with 197 homeruns in thirteen seasons with the Royals. The Dodgers and Diamondbacks have expressed mild interest, but no numbers have been exchanged. It is believed that the Padres are also talking with Tony Clark, so no deal is imminent. Across the country in New York, the Mets appear to be in talks with Craig Wilson about a one year deal. Wilson played in just 24 games last season and hit .172, so a minor league deal is likely. His best year came in 2004 when he hit .264 with 29 HR and 82 RBI, but he failed to improve beyond that. I still think Wilson gives the Mets a versatile right handed hitter off the bench who can hit for some power.

UPDATE: According to sources inside the Padres, Tony Clark and the Padres are in serious discussions.