Share All sharing options for: Teixeira Loves Baltimore, But... 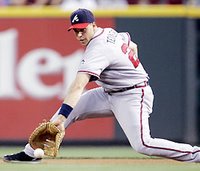 Braves first baseman Mark Teixeira was born in Baltimore. He has always loved playing the Orioles and enjoys seeing his family and friends at games out there. So, does that mean he is heading to Baltimore next off season via free agency? Teixeira did very well in Atlanta towards the end of last season and it would make sense that he would continue playing there. However, his agent is Scott Boras who always has his players go to the market to cash in. Not only that, but several big spending teams are in the need for a first baseman and could easily pay for a contract that he will be looking for. I suspect that Teixeira will be looking at a Vernon Wells type deal to start, but that will probably go up. Players that I have talked to on the Braves say the team is run like a family. They say everyone works out together, know each others families- all the things that would make a player comfortable in a new city. So don't rule out a long term deal for Teixeira in Atlanta. The Orioles have the money, but probably will look at for a hometown discount to bring him in. They just seem to conduct their business like that. As for other teams, I suspect the Yankees, Blue Jays, and Mets, among others to be the most aggressive suitors.