Trachsel Back to Baltimore?

Share All sharing options for: Trachsel Back to Baltimore? 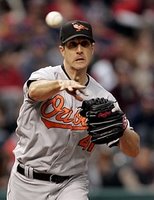 It appears that the Orioles and Steve Trachsel are talking about a deal that would bring the veteran back to Baltimore. The main reason would be to mentor some of their young pitchers, but also because Trachsel was very good with them last season. Trachsel went 6-8 with a 4.48 ERA for the Orioles before he got traded to the Cubs. I think bringing Trachsel back would also take some pressure off their young guns to perform. Furthermore, Trachsel has a lot of experience against the teams they will be playing, and to be able to offer his advice to the young pitchers, might be worth the price, even if his performance drops. I expect him to ask for another one year deal worth 3 million dollars.

Benson in Philly?: It appears the Kris Benson is on his way to Philadelphia. Although I have not been able to confirm this, I have heard over the weekend that talks are going well, and numbers have been exchanged.